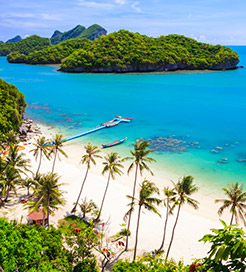 Koh Samui is the second largest island in Thailand, found just off the east coast of the Kra Isthmus in the Gulf of Thailand. Part of the Chumphon Archipelago, it falls within Surat Thani Province, roughly 80 kilometres from the eastern coastline.

A natural beauty, Koh Samui has retained its reputation as one of Thailand’s most desirable destinations thanks to its broad appeal and supreme coconuts. Everyone from high-end holidaymakers to budget-seeking backpackers lauds it as heaven on earth, perfectly balancing Thailand’s famous nightlife, idyllic backdrops and world famous luxury resorts. First inhabited roughly 15 centuries ago, Koh Samui was one of the first Thai islands to receive an influx of foreign tourists in the 1970s, but has steered away from the raucous full moon party atmosphere, embracing a more upscale way of life.

With a hilly interior, the island hides many treasures for those venturing away from the immaculate, palm-lined beaches; many majestic waterfalls cascade down Koh Samui’s cliffs, the most picturesque are Na Muang falls, found approximately 12 kilometres southeast of Nathon Bay. Also on your hike itinerary should be the Secret Buddha Garden, a series of statues depicting animals, deities and humans surrounded by lush jungle, affording sublime hilltop views across the island. However, arguably Koh Samui’s most famous attraction is the Big Buddha Temple on a small offshore islet to the northeast connected by a causeway. Known locally as Wat Phra Yai, it stands 12 metres high, featuring a seated Buddha embodying steadfastness, purity and enlightenment.

Much like southern Thailand in general, Koh Samui is excellent for diving and snorkelling, with the best time of year falling between June and August when the waters offer visibility of up to 10-30 metres. Considered one of the safest places in the world for first timers, you will be able to swim in fantastic coral reefs, huge rock formations and underwater caves inhabited by colourful fish.

A hugely popular resort island, Koh Samui is well linked by ferry, with numerous sailings to the north coast every week operated by top class ships. If travelling from the mainland, the port of Chumphon offers regular routes, a common tourist gateway to the Gulf of Thailand islands. Koh Samui is also easily reachable from the neighbouring Koh Phangan and Koh Tao, with journeys lasting approximately 20 minutes and 1 hour 40 minutes, respectively.

Routes and Ports in Koh Samui