Ferries from 2795 routes and 659 ports worldwide 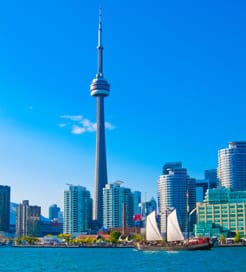 Famous for awe-inspiring backdrops and wildlife in abundance, Canada is a true masterpiece of nature. However, whilst the North American country is sparsely populated, the charismatic cities of Vancouver, Montreal and Toronto offer vibrant getaways from the tranquil backcountry.

With its generally colder climate, it is a hub for outdoor winter activities. Whistler Mountain in British Columbia has great powder for snowboarding, you can surf the swells in Nova Scotia or kayak down the magnificent South Nahanni River in Northwest Territories.

As you would expect, Canada also has some of the world's most impressive parks. The Gwaii Haanas National Park Reserve is located in the southernmost Haida Gwaii, 130 kilometres from the western coast and has a total landmass of almost 4,000 square miles. It boasts hot springs, ancient totem poles, burial caves as well as humpback whales frequently seen around its 150 tiny islands.

However, Canada has far more than just impressive lakes and forests. Vancouver offers a vibrant and classy nightlife with upmarket bars and restaurants overlooking a gorgeous marina, whilst Montreal's 18th Century architecture and contemporary art scene are sure to excite any traveller.

A visit to the Royal Ontario Museum in Toronto is also a must, as it is one of the largest natural history museums in North America.

To get a real taste of Canadian culture, be sure to sample some of the local fish, cheese and baked goods in the Granville Island Public Market. Be on the lookout for national favourites such as poutine, Montreal-style bagels and salmon jerky.

Canada has everything you need for a fantastic holiday, so book a ferry today. Crossing the border from Seattle, USA takes under three hours with frequent sailings to Victoria, British Columbia.

Routes and Ports in Canada