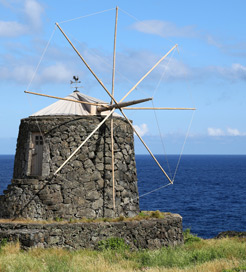 Compare ferries from Flores to Corvo

There is currently just the 1 ferry route running between Flores and Corvo operated by 1 ferry company – Atlanticoline. The Santa Cruz to Vila Nova do Corvo ferry crossing operates weekly with a scheduled sailing duration from about 40 minutes.

Whilst we’ve taken great care to ensure the information on this page is correct, as the frequency and duration of crossings on all routes can vary from time to time we’d advise that you get a live quote for current availability on this Flores Corvo crossing between Santa Cruz and Vila Nova do Corvo.

Ferries from Flores to Corvo

Flores is the westernmost island of the Azores, an autonomous region of Portugal in the North Atlantic Ocean.

Regarded as the most attractive island of the archipelago, Flores has a ruggedly beautiful terrain consisting of magnificent crater lakes, dramatic cliffs plummeting into the ocean and vibrantly coloured flowers blanketing the coastal plains.

The village of Faja Grande is the most westerly in Europe, set before a large natural bowl with picturesque waterfalls and plunge pools, whereas the capital, Santa Cruz is ideal for birdwatching.

Flores is a fantastic canyoning and hiking destination, too, thanks to the large number of cascades throughout the unspoilt, hilly landscape. However, there are also plenty of lovely beaches if you would prefer a more relaxed day on the island.

Flores is the only Azorean island to provide ferry crossings to Corvo, which means it offers the most routes of the island group. From the capital in the north and the village of Lajes Das Flores to the south, you can sail to anywhere in this beautiful Portuguese archipelago.

Corvo, meaning ‘Island of the Crow’, is the smallest and northernmost of the Azores, a group of Portuguese islands stretching from northwest to southeast in the North Atlantic.

With the entire island falling under one municipality, Vila Nova do Corvo, what you see is what you get on Corvo: a beautiful, vibrantly green drop in the bright blue ocean. The 400-strong village is made of narrow streets, black facades and a singular, picturesque plaza, with the surrounding houses protected by traditional wooden locks created by local craftsmen. Given its idyll nature, most come to Corvo for incredible walks, spotting rare birds and to savour the sublime views over crater lakes. You can even kayak to the very western edge of Europe.

Ferries connect Corvo with the larger island, Flores, directly to the south. A regular service runs from Santa Cruz on Flores to the ferry terminal in Vila Nova do Corvo on the south coast, with slightly less frequent crossings from Lajes.