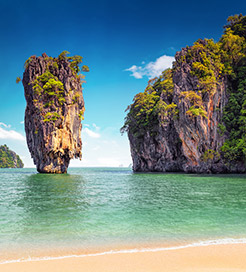 Whilst we’ve taken great care to ensure the information on this page is correct, as the frequency and duration of crossings on all routes can vary from time to time we’d advise that you get a live quote for current availability on this Langkawi Phuket Island crossing between Langkawi (Telaga Harbour Marina) and Phuket (Rassada Pier).

Ferries from Langkawi to Phuket Island

Langkawi is a Malaysian archipelago consisting of 99 islands in the Andaman Sea, roughly 30 kilometres from the mainland.

Given its full name reads ‘Langkawi, the Jewel of Kedah’, it comes as no surprise the islands have some stunning natural features, the highlights being its clear waters, white beaches and dense jungle.

Despite these major pull factors, Langkawi has somewhat managed to resist mass commercialisation and still maintains an authentic, rural Malay atmosphere. For example, many traditional villages known as ‘kampung’ can be found just a stone’s throw from luxury spas and beach bars.