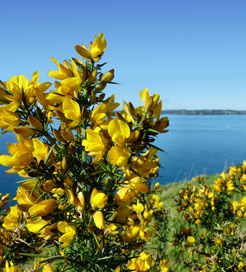 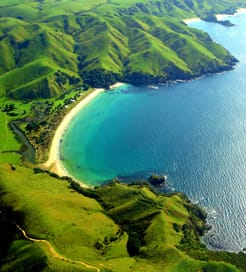 There is currently just the 1 ferry route running between Motutapu Island and New Zealand operated by 1 ferry company – Fullers Ferry. The Motutapu to Auckland ferry crossing operates weekly with a scheduled sailing duration from about 35 minutes.

Whilst we’ve taken great care to ensure the information on this page is correct, as the frequency and duration of crossings on all routes can vary from time to time we’d advise that you get a live quote for current availability on this Motutapu Island New Zealand crossing between Motutapu and Auckland.

Motutapu Island lies just to the northeast of Auckland in the Hauraki Gulf of New Zealand’s North Island.

At 178 million years old, Motutapu Island has a rich and fascinating cultural heritage dating back to the Maori people who first settled there. Scattered across the grassland are numerous archaeological sites and a number of World War II military remains, too.

Its landscape contrasts to the volcanic and mountainous neighbouring island of Rangitoto. It’s characterised by gently rolling hills and idyllic bays, and, thanks to an intensive restoration project, it’s now a pest-free island with an array of rare animal and plant species.

As a popular day trip from Auckland, there are frequent sailings back to the city from Motutapu Island which usually last around half an hour, operated by popular local ferry companies.

New Zealand is a small country, similar in size to Great Britain or Japan. With a population of only four million people it’s gloriously un-crowded and many areas are sparsely settled.

New Zealand has a temperate climate. Winters are fairly cold in the south of the South Island but mild in the north of the North Island.

Known by some as "The Shaky Isles" because of frequent seismic activity, lying on the margin of the two colliding tectonic plates (the Pacific and Indo-Australian), earthquakes are common, particularly in the south west of the South Island and in the central North Island. As a result, the North Island's scenery is marked by several active and dormant volcanic cones.

Wellington is the capital of New Zealand. The Windy City is built on the foreshore of Wellington Harbour and ringed by mountains, providing the scenic home of many of New Zealand's national arts and cultural attractions.