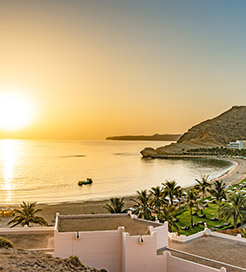 There is currently just the 1 ferry route running between Oman and Masirah Island operated by 1 ferry company – National Ferries Company. The Shannah to Masirah ferry crossing operates Weekly with a scheduled sailing duration from about 1 hour 0 minute.

Whilst we’ve taken great care to ensure the information on this page is correct, as the frequency and duration of crossings on all routes can vary from time to time we’d advise that you get a live quote for current availability on this Oman Masirah Island crossing between Shannah and Masirah.

Ferries from Oman to Masirah Island

Masirah is the largest island in Oman, sitting just off the mainland’s east coast in the Indian Ocean.

The island grew in popularity during the 1990s, as more and more people discovered its deserted beaches and fantastic kiteboarding conditions, with monsoon winds blowing steadily at over 20 knots. Snorkelling is another top attraction, with shallow waters filled with coral reef and the largest number of Loggerhead turtle breeding grounds in the world.

Although there are a few hotels, camping on Masirah has remained a popular choice amongst visitors due to the ruggedly picturesque coastline and varied terrain comprising steep plateaus, low hills and open, sandy plains.

To reach Masirah Island by ferry, all you have to do is take the short crossing from Shannah, a small port town on the east coast of Oman. The ferries dock in Dhuwwah on Masirah’s northwest coast, situated just off the 51 coastal road.