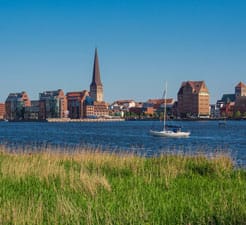 A traveller from United States just booked Cairnryan to Larne

Funchal ferry port in Madeira Islands connects you with Porto Santo in Porto Santo Island with a choice of up to 13 ferry crossings per week. The duration of the Funchal to Porto Santo crossing is from 2 hours 15 minutes and the crossing is operated by Porto Santo Line.

Tucked away in a crescent shaped valley on the warm southern coast of the autonomous Portuguese region of Madeira lies the picturesque capital of Funchal, a historic city built almost entirely upon the gradual slopes that lead up from the North Atlantic coast towards the island’s inland mountains.

For ferry-goers entering the port it’s an impressive sight. Tiers of orange-roofed houses sit stark against the backdrop of verdant woodland that covers the hillside, and winding streets climb to the highest reaches of the city where panoramic views of the azure bay are enough to take the breath away.

Funchal is a particularly popular destination during New Year’s Eve. Each year the city hosts a firework display along the promenade, an impressive spectacle that was awarded a Guinness World Record in 2006 for being the biggest ever show of its kind.

The port of Funchal, centrally located on the shores of the city, is a major gateway for those visiting the island. A modern passenger terminal sits at the end of a long pier, just a short walking distance from the city centre. Taxis are available to take passengers between Funchal and the harbour side and bus stops can be found at regular intervals along the main Avenida Do Mar road that feeds into the port.

Currently only one route operates from the port. A Porto Santo line ferry sails the short distance northwards to the smaller Madeiran island of Porto Santo.

How To Get To Funchal Ferry Port