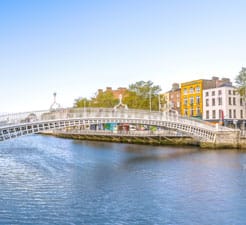 A traveller from UK just booked Dublin to Holyhead

Zadar ferry port in Croatia connects you with Ancona in Italy with a choice of up to 2 ferry crossings per week. The duration of the Zadar to Ancona crossing is from 9 hours and the crossing is operated by Jadrolinija.

Zadar to Ancona with Jadrolinija

Zadar is a city in Croatia on the Adriatic Sea. It is the centre of Zadar county and the wider northern Dalmatian region.
Zadar gained its urban structure in Roman times; during the time of Emperors Julius Caesar and Augustus, the town was fortified and the city walls with towers and gates were built. On the western side of the town were the forum, the basilica and the temple, while outside the town were the amphitheatre and cemeteries. During the Middle Ages, Zadar had fully gained its urban aspect, which has been maintained until today. In the 16th century, Venice fortified the town with a new system of defensive walls on the side facing land. In the first half of the 16th century, architectural building in the Renaissance style was continued.
Since World War II the city has developed as a strong economic and tourist centre.

How To Get To Zadar Ferry Port