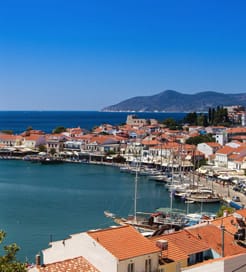 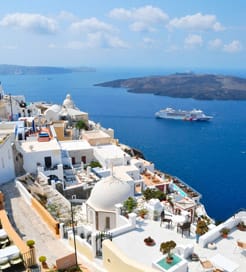 There are a combined number of 20 ferry crossings each week across a selection of 6 Ferry Routes which are operated by 2 ferry companies including SeaJets & Hellenic Seaways with the shortest crossing taking around 3 hours 35 minutes (Karlovassi to Mykonos).

This is a general summary of the services on offer between Samos and Cyclades Islands, for live information select from our Fare Search.

Ferries from Samos to Cyclades Islands

The Cyclades are an archipelago in Greece, southeast of the mainland in the Aegean Sea, containing just thirty three inhabited islands from a total of two hundred and twenty.

Quintessentially Greek, this is arguably the best selection of islands in the Aegean. Standing out from the crowd are Mykonos and Santorini, earning international stardom with their white-washed villages, glistening waters, rugged coastlines and jumping nightlife. Uninhabited, the centrally located Delos is the supposed birthplace of Apollo, boasting intricate mosaics and breath-taking monuments of antiquity. They offer everything you would expect from this beautiful part of the world; so depending on where you step off the ferry, you can hike glorious trails, relax on fine beaches or indulge in fresh, classic Greek dishes.

The demand for ferries in Greece is incredibly high, resulting in top-quality services and frequent sailings to and from many destinations. The Cyclades are no different, with regular ferry routes from numerous islands, within the archipelago, and from ports on the mainland, including Piraeus in Athens.