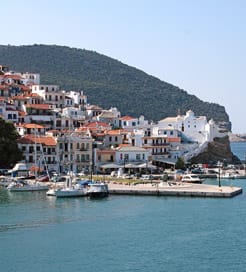 The fastest route between Skopelos Island and Sporades Islands is Skiathos with a crossing duration of around 0 hour 15 minute. With so many routes on offer we make it simple by comparing all similar routes in one search so you can quickly find what you are looking for.

Skopelos is part of the Northern Sporades island group located in the western Aegean Sea off the coast of Greece.

Regarded as one of the most attractive islands in the country, Skopelos offers a peaceful atmosphere and a landscape comprising lush pine forests, picturesque villages and a craggy coastline. In fact, the island’s stunning surroundings and clifftop church of Agios Ioannis Kastri were used in the 2008 film ‘Mamma Mia’.

There are many walking trails that take you through the island’s green interior, too, where you’re likely to spot countless olive trees and plum groves, the fruits of which are commonly found in local dishes.

Skopelos has a couple of ports along its coast situated in Glossa to the northwest and Skopelos Town to the southeast, offering frequent sailings to the surrounding Greek islands and the mainland.

The Sporades Islands are a Greek archipelago jutting off the east coast, in the Aegean Sea, to the north of Euboea Island.

Of these sporadically placed, quiet islands, Skiathos is the most developed and cosmopolitan, owning some of the finest beaches in the Med as well. The remaining permanently inhabited members: Skopelos, Alonissos and Skyros, have charmingly rugged landscapes, authentically slow-paced villages and picture-postcard, azure waters. They also offer long networks of peaceful, pine-clad walking trails, taking you past beautiful monasteries and glistening lakes, ideal for exploring the hidden gems of the Sporades Islands.

The easiest and most popular way of jaunting off to the Sporades Islands is by ferry, with leading operators providing dozens of frequent routes from the mainland and surrounding islands to numerous ports in the Sporades archipelago.