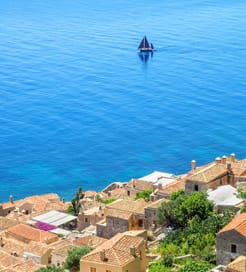 Nestling in the northwest corner of the Aegean lies one of Greece’s lesser-known island groups, the Sporades and although comprising 24 islands, only 4 are inhabited; Alonnisos, Skiathos, Skopelos and Skyros.

Characterised by dense forest and steep hills that roll into some of Greece’s finest beaches, the Sporades archipelago contrasts to the stereotypical Greek island of rugged hilltops scattered with whitewashed buildings.

The Sporades Islands have a rich and varied wildlife and Patitiri on Allonnisos is home to the innovative National Marine Park, the largest in Europe and a must-see for any animal lover. Its fundamental aim has been to protect the endangered Mediterranean monk seal and various sea birds. You’re also likely to spot some dolphins on your excursion, so don’t forget your camera.

As you would expect from any Greek island, snippets of the nation’s history are readily available. On Skiathos, you will find the famous Moni Evangelistrias, a hilltop monastery used as a shelter for soldiers fighting for independence in the 1800s.

For a detailed insight into the history of Skyros then be sure to visit the Manos Faltaits Folk Museum, a 19th Century mansion housing fascinating exhibits of traditional costumes, ceramics, daggers and vintage photographs.

Film buffs can re-live excerpts from the 2008 movie ‘Mamma Mia’ on the island of Skopelos, including a visit to the gorgeous Saint Ioannis Chapel which was used in the film’s wedding ceremony scene.

These stunning islands make the perfect romantic getaway, too, as you can ride through lush forests and along gorgeous beaches on horseback, or you can simply enjoy some exquisite seafood overlooking the coastline at sunset.

You can sail from Agios Konstantinos and Volos on the Greek mainland to Skiathos, Skopelos and Alonissos, with frequent crossings provided by Hellenic Seaways each week.

There are also more frequent crossings between the Sporades Islands of Skopelos, Alonissos and Skiathos. 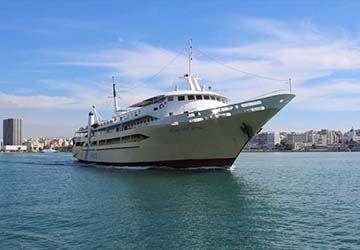 Routes and Ports in Sporades Islands