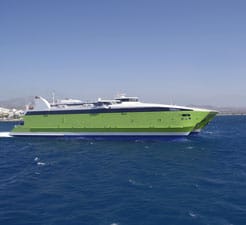 How to book a Ferry to Tangier

Direct Ferries allow you to compare all ferries to Tangier in Morocco to ensure you get the best possible ferry price for your crossing.

Not only will you get a ferry price for your chosen sailing but we’ll also show you prices for ferries to Tangier around your preferred departure time as well as sailings to alternative destinations to ensure you get the best available price for your trip.

All you need to do is enter the relevant information into our 'Fare Search' and hit search to continue.